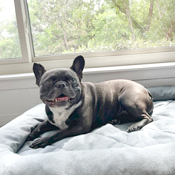 Give a big ol’ Texas welcome to Augusta! This handsome 5-year-old brindle boy was surrendered along with his bonded sister, Gigi, when his former owner found herself newly single with two very young kiddos to care for. She made the difficult decision to surrender the pair to FBRN to give them the best chance at finding a family who can shower them with love and attention.

Augusta is older and perhaps a bit wiser than his younger sibling, although Gigi might disagree. He weighs in at 25 pounds and, much like Gigi, has been settling in well and really aced the long drive home, napping most of the way. There is a senior resident Frenchie whom they both will meet soon so stay tuned on details of that introduction. You never know, three may turn out to be company! Augusta’s motto seems to be “play hard, nap harder.” He and Gigi get along famously and play really well together. So far, they also get along with the two-year-old human in the house.

As you can imagine, two is better than one in most cases but it’s also more expensive. If you would like to donate and sponsor Augusta while we learn more about him in foster care, please click on the link. After thanking you very enthusiastically, you will find him napping very shortly thereafter.

Donation to FBRN – For Augusta.