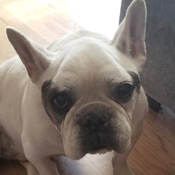 What does FBRN’s newest foster have in common with Potter, Styles, Houdini, Belafonte, Connick, Jr., and Prince? The name Harry of course! And we predict our Harry will soon make a name for himself with his debut on the foster page. Harry was found wandering the lonely streets of Texas by a Good Samaritan, and despite significant advertising, his owner was never found. He was surrendered to FBRN in hopes of finding him the very best family possible.

At an estimated 8+ years old, this handsome senior is as sweet as can be. He will be evaluated for a slight limp and may also have some dental needs, but otherwise, he seems perfectly imperfect. Harry is deaf but that doesn’t seem to cause him any problems. And since being in foster care, he has learned how to use the dog door, gotten a bath and nail trim, and spent the majority of his time relaxing with his new best friends. He has been nothing but calm and mellow. Make sure to follow Harry’s journey as we learn more about this cutie and show the world he can have as many admirers as the best of the Harrys!

Before you know it, it will be the end of the year, so why not donate a little to Harry’s fund as he embarks on his journey to find a new family. Click on his link and show the world he can have as many followers as the best of the Harrys. Let’s get this fella some supporters and maybe he’ll send you his pawtograph once he becomes internet famous.

Harry in Texas you look like such a sweet boy!!!

Donation to FBRN – For Harry

In memory of my beautiful deaf girl Sadie.

Sending a little love and belly rubs in honor our angel boy Frank.