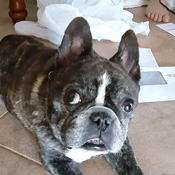 Look who’s come barreling into FBRN! It’s Hondo, our very own little Short Round—built like a linebacker (all 22 pounds of him) but sweet as a summer cherry pie.

Six-year-old Hondo came to FBRN after his original owners were unable to keep up with the time and expense of his medical issues. Poor Hondo has a terrible case of the dreaded Frenchie itchies, and he will need extensive dental work before embarking on his journey to a forever home. Fortunately, Hondo’s Fairy Dogmother (a.k.a. foster mom) is up to the task. Hondo has already gotten a Cytopoint shot to help calm his itchy skin, and the vet took cultures of his skin and inner ears so we can figure out the underlying causes of his awful itchiness. In the meantime, he’s getting a medicated bath every other day, and rumor has it that he’s an absolute angel in the tub.

Hondo is, in a word, endearing. He’s been a perfect houseguest and is melting the hearts of everyone he meets. His Frenchie snores sound more like a cat purring, and his bark has been described as “the cutest ever.” He’s even a gentleman at mealtime and waits until his canine foster siblings have finished their dinners before daintily tucking into his kibble. Swoon!

If you’ve found yourself smitten with darling Hondo and would like to help contribute to the cost of his care, please consider becoming his sponsor. Anyone who’s been through the allergy wringer with their Frenchie knows that it will take time (and money) to get this little guy comfortable in his skin. But we also know that Hondo is 100% worth it. Hondo and all of us at FBRN send out a million thanks for your support!

Donation to FBRN – For Hondo

This donation for Hondo is made in loving memory of my beautiful Reggie whom we lost one year ago today.