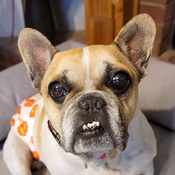 Everyone say hello to new FBRN foster, Rascal! This former commercial breeding dog is ready to leave the stud (muffin) life behind while retaining his title of ladies’ man. Just look at those teefs! At an estimated age of 10 years old, Rascal was given to a Good Samaritan by his former owner who then surrendered him to FBRN. And we’re glad he’s here!

Rascal may not quite be living up to his name since he hasn’t caused much mischief yet. His most favorite things to do so far are napping, cuddling and receiving pets. You might even mistake him for a statue because he can stay in one spot all day long as long as someone is petting him. He did great on the long car ride to his foster home, sleeping most of the way. He does well in a crate, sleeping and eating his meals in his crate also. Rascal likes other dogs, but doesn’t quite know how to play yet. Since he’s already aced advanced napping, he might be up for a “canine playstyles and other fun stuff with dogs 101” class!

While Rascal still has his “coin purse” (he will be neutered before adoption), his wallet is empty. If you would like to help him retire in style, please click on the link to become his sponsor. We can’t think of anything better than Rascal leaving his breeding days behind him and napping into a bright and comfy future! He thanks you with the best crooked-tooth-underbite smile we’ve seen in a while