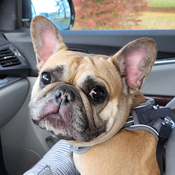 Roll out the red carpets please…introducing this year’s cutest Frenchie of the Year, Watts!

This handsome fella arrived in FBRN care when his previous owners realized they could no longer provide the time and attention that Watts needs and deserves. Wasting no time at all, Watts has already won the hearts of his foster family – and everyone else he’s met for that matter.

Being a young 2-year-old boy, Watts still has plenty of puppy energy. He is also well-mannered on a leash and already knows basic commands. What an amazing boy! We think he’s going to do just great with other dogs, but slow introductions to resident dogs are important to setting a new dog up for success, so we’ll have much more to tell you about Watts and how he interacts with other dogs soon.

In the meantime, if you would like to sponsor Watts as he makes his way over to the available page, please click on the link. All of us at FBRN are so appreciative and we’re sure Watts would love to shower you with Frenchie kisses to show his appreciation!

Donation to FBRN – For Watts

In loving memory of our Barkley