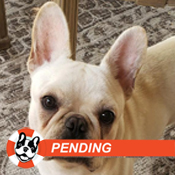 “Amos is a lover. He looks into your eyes when you pet him. He brings his toys to share with you. He greets you in the morning with exuberance and joy that let you know he’s loving life and he loves that you’re in his world! He’s just beginning his life and he will be an amazing companion for a loving home. He’s smart and happy and healthy, and, above all, he’s full of love that he’s ready to give generously to those who love him.”

He hasn’t brought along $24, ham and cheese sandwiches or Andy but our marshmallow creampuff Amos is headed to the available page. He’s bringing a lot of great information learned from his time in foster care and wants to share it with the world (or at least Canada and the US). Amos was tearfully surrendered to FBRN at just under a year old when his previous family had to move overseas. He is now ready to show off his impressive resume in search of his forever family.

According to his foster mom, “Amos is a unicorn among foster Frenchies. He’s young and healthy. He’s active and happy. He’s not overly loud or destructive. (Well, yeah, he’ll bark when he’s excited and he’ll occasionally find a shoe that cannot be resisted, but that’s only human…I mean canine.)” If anyone knows anything about rescue Frenchies, “healthy” and “not overly loud” can be rarities. But Amos does have a secret: he doesn’t like to share and expects to be your one and only furry companion. We’re sure he wouldn’t mind a goldfish or two as long as they stay in their own bowl and don’t try to hog all the human attention.

Because Amos has been territorial toward dogs in the past and has a history of resource guarding, he should not be around young children or other animals. He has a long life ahead of him and his new family must be willing to provide him an only-animal home for his lifetime. This means no dog parks, no doggy sleepovers, and no future furry siblings for Amos. But you won’t need or want for more because Amos is enough. He is a very happy dog who is eager to please. He’s curious and smart having quickly learned that when he rings the little bell at the back door he gets to go outside. This not only helps with potty training and but also training the human to get up and let him outside every time he just wants to go outside and play. And play he will: fetch, zoomies around the yard, fetch, catch the water from the hose or sprinkler, chew toys, fetch and more fetch. Giving up the ball is a bit of a challenge so having two balls is the key when playing with Amos. We said he was smart but heck, he’s a dog who really likes chasing balls so he can be tricked.

If you noticed we mentioned Amos is curious and smart. Full disclosure: that means he has figured out he can jump up on chairs and couches, and chairs and couches often have tables next to them, and tables frequently have food or interesting things on them to chew. His new family will need to set guidelines and enforce them consistently, as they would with any dog or puppy, of course. Since Amos is a healthy pup, a first-time Frenchie owner could be a great match. He would love to have someone around the house quite often to make sure he doesn’t have any potty accidents in the house (and just because he thinks being around humans is awesome) but foster mom thinks he could be left alone for 4-5 hours at time. He is still an energetic and enthusiastic puppy so coming to the office in the next year or two might not be the most productive thing for employees, especially if others are also allowed to bring their pups. On Amos’ wish list is a fenced yard because, well, fetch.

Now, Amos has another secret…he sucks. Of course not in the way you might think but he literally suckles as if he was weaned too early. So if he finds himself beside you on the couch or on the floor, he seeks out your arm and goes to town. He gently suckles and it soothes him. Once he’s had enough, he’ll rearrange himself and go to sleep. If you find this as endearing as his foster mom does, then you might be a great match.

Foster mom wants everyone to know that “Amos is a lover. He looks into your eyes when you pet him. He brings his toys to share with you. He greets you in the morning with exuberance and joy that let you know he’s loving life and he loves that you’re in his world! He’s just beginning his life and he will be an amazing companion for a loving home. He’s smart and happy and healthy, and, above all, he’s full of love that he’s ready to give generously to those who love him.”

If you’re feeling lucky (and of course, qualified), plan your road trip to Nevada. Amos may be on the smaller side but we definitely think he’d prefer a car ride over an in-cabin flight. He tolerates a crate but it’s not his favorite and seems to really settle into car rides so why not give him what he wants and make the drive. He’ll look at you with those irresistible puppy-dog eyes in thanks.

FBRN does not ship dogs as cargo, so adopters are expected to pick up their dogs from their foster family.

Potty training is a work in progress.

Amos is a resource guarder so must never be around small children and must remain an only dog.

Amos has tested positive for Giardia even after treatment but exhibits no symptoms. The vet believes he is a carrier and no treatment is necessary at this time. He must be closely monitored for recurring.

A little something for your piggy bank Amos!!

Amos you have a face that should be famous!

Oh Amos. You and Your face are just perfect!!!!! You are the spitting image of my late little boy Louie. I would love to have you in my life.

For Amos, with love..

For Amos, with love..

You would be a great replacement for my Eloise that was my lovely Frenchie I got from FBR in 2007. The hurt is over and time to bring another frenchie into my life.