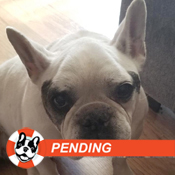 “Harry is so loving and sweet. He’s older and slower but still has lots of life left. He sometimes wakes up at night so don’t crate him or he will wake you up to let him out. He can almost take care of himself if he has all the things he needs.”

Handsome Harry has arrived on the available page! At eight years old, Harry was found wandering through a parking lot, which is no place for a dog! He was rescued by a Good Samaritan who called FBRN to help a Frenchie in need.

Friendly as could be, Harry loves everyone he meets, especially kids! He enjoys the company of other dogs and would do well in a home with furry siblings. The ideal home for Harry will have other canine companions. While it’s unknown if he likes cats, Harry does like the resident tortoise in his foster home.

This pied prince is a senior and has several health issues that come with it, such as hip and vision issues. Harry is also deaf, but that doesn’t seem to bother him much. He knows hand signals and will let you know when he needs something. During his time in foster care, he’s learned how to use a dog door. It’s safe to say that he’s just as smart as he is handsome!

Sweet as can be, Harry loves nothing more than loafing around the house. He’s not so interested in toys and would rather cuddle up with his person on the couch. If it’s not nap time, Harry is more than happy to assist you around the house and oversee all activities. Even when Harry is taking some time to himself, he still wants to be near someone.

A home with a fenced yard is required for Harry, as he may wander looking for you! Due to his age and hip issues a home without stairs is needed. Also, Harry has taken a liking to the Lone Star State and his future family should live within driving distance to his foster home. It would be ideal for Harry to have a home where his person was mostly home since he does best when near his person. However, Harry is a mellow guy and would gladly accompany you to the office. He’ll lounge around and just be happy to spend time with you!

Here’s what Harry’s foster mom has to say about him, “Harry is so loving and sweet. He’s older and slower but still has lots of life left. He sometimes wakes up at night so don’t crate him or he will wake you up to let him out. He can almost take care of himself if he has all the things he needs.”

Do seniors make your heart sing and melt at the same time? If this sounds like you, send over an application for Harry to live out his golden years in your home! FBRN does not ship dogs as cargo, so adopters are expected to pick up their dogs from their foster family.

Harry has some limited mobility due to age.

Harry in Texas you look like such a sweet boy!!!

Donation to FBRN – For Harry

In memory of my beautiful deaf girl Sadie.

Sending a little love and belly rubs in honor our angel boy Frank.