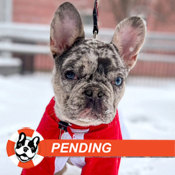 “Idris is not just an adorable dog with heterochromia. He is resilient, happy, snuggly, and a truly sweet dog. He has recovered well from his elbow fracture and has learned house manners and how to be a member of a pack despite his unlimited amount of puppy energy. He takes correction well from the other dogs and he is happiest when he is with one or more of his people and around his foster sisters. Therefore, it is important for us as fosters to know that he will go to a similar type of environment where he will continue his growth. He is going to make one lucky home extremely happy. This little wiggle worm will wiggle himself into their hearts.”

What’s more exciting than Idris Elba reprising his role as John Luther in the upcoming “Luther” movie? Idris “Elbow” hitting the available page! This boisterous puppy arrived in FBRN care after he broke his elbow. His original owner was unable to afford surgery and made the difficult decision to surrender Idris to FBRN where he could get the care he needed.

A resilient little boy, Idris proved he has a strong spirit while recovering from his injury. With that pesky broken elbow behind him, Idris’ personality has emerged. He has shown his foster family that he’s an intelligent and happy little guy who enjoys spending time with his people and foster fur-siblings. Idris loves to play and socialize, and we think he’d be a great wing-Frenchie for any single folks out there!

As curious as they come, Idris loves to explore outside and play with his Frenchie foster siblings. Idris has a lot of energy and would thrive in a home with a fenced yard and another similarly-sized dog. While Idris might be one of the coolest cats we’ve ever met, we’re not sure how he’d be with an actual feline. For this reason, Idris won’t be going to a home with cats.

Idris loves everyone he meets and squirms with happiness when greeted! He can really move fast, especially when excited, and could knock over a small child. Although his fractured elbow has healed, there is still concern of re-injury. To keep this handsome boy safe, children in his forever home should be dog-savvy and at least 10 years of age.

Being a puppy, Idris has two settings: on and off. One minute he’ll be zooming faster than Captain Janek flying a spaceship in “Prometheus”, and moments later, he’s ready to snuggle up for a nap. Did we mention that Idris loves to play? Whether with a stuffed animal or his foster siblings, this boy is always up for a game. Idris is also a big fan of chewing on anything and everything. Luckily, he’s a smart guy and has learned how to be a gentleman in the home, as much as a puppy can at least!

Idris takes correction easily from his fur-siblings and has quickly learned to be a member of the pack. He’s also learned several commands that he will gladly show off for treats! Idris knows sit, down, and stay – during mealtimes, he will stay until given the command to go to his food bowl. Pretty impressive for a six month old pup!

Other than his elbow injury, Idris is a healthy little guy! He doesn’t have any allergies or health issues. In his foster home, he is fed a raw diet and it would be great if his forever family continued that. Potty training is still a work in progress. However, Idris has made great strides – he’s gone from having multiple accidents a day to only a few a week. He’s also old enough and able to hold his bladder overnight now. Woohoo! Idris’ forever family will need to be patient as he could have setbacks when introduced to a new environment. With a patient forever family and consistent potty schedule, Idris will be officially potty trained in no time!

Idris is crate trained but isn’t a fan and he will make sure that fact is known by belting out the jailhouse blues while pawing at the crate. To keep him safe, his foster dad recommends getting a soft-sided crate instead of a metal crate. Just like his namesake’s role in “Luther”, Idris is a little detective and tries to get into (and chew on) everything in sight! If there’s something to be looked into, Idris is on the case! While we appreciate his due diligence, he’s not ready to be left un-crated while home alone. Also, because of his vocal performances, Idris wouldn’t be a good fit for an apartment or condo with shared walls.

Even though his namesake appeared in the TV show, “The Office”, as character Charles Miner, we think our little Idris is a bit too talkative to show proper workplace etiquette. Once he gets a little older and settles down, we’re sure he’ll be the best paper salesman Dunder Mifflin has ever seen!

Have you been swept away by Idris’ good looks, sweet demeanor and silly personality? Thankfully, our sweet Idris can be found right here in the great state of Connecticut. So, if you’re smitten with this boy, please fill out an application today! If selected, plan on traveling by car. While Idris is small enough to fly, he’ll likely bust out his best vocals on the plane. FBRN does not ship dogs as cargo, so adopters are expected to pick up their dogs from their foster family.

Idris is an active puppy and potty training is a work in progress.

Here is a little something for Idris’ recovery. We cannot wait to see this sweet boy all healed up Love, the Wendell family.

Oh Idris! You poor little boy. Heal up. You’re so unique and special with your coloring and beautiful eyes. We love you.

Wishing Idris and his FBRN buddies quick recoveries and long healthy lives. We hope to have you join our loving family Idirs!

Idris please have a speedy recovery.