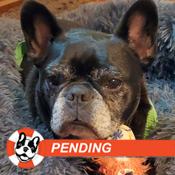 Lina is a love! You would never know she is a senior, but sit down to read or rest and she will join you on the bed or couch for a rest as well. Her morning routine consists of a walk and breakfast and then she is ready for a little play time. The rest of the day she will be your shadow and best friend.

Update on 11-06-2021 : What light through yonder window breaks? It is the east, and Lina is the sun. Lina has risen and set on over to the available page so get your applications ready! This sweetheart was surrendered when her previous family had a personal change in circumstances. Don’t let her age fool you; at 10 years old, she has more spunk than some Frenchies half her age!

Growing older doesn’t come without some challenges, but Lina takes them in stride and is hoping for a family who will do the same. She may have some mild cataracts, but for now, it doesn’t seem to affect her. Several years ago, Lina suffered a back injury due to IVDD (intervertebral disc disease) which left her partially incontinent. She needs to be taken out for frequent potty breaks (about every 2-3 hours during the day) and she may still have occasional accidents inside, but her foster family will tell you what works to minimize accidents. Lina would love a family who doesn’t care about some dribbling here and there from time to time. Due to her IVDD, a single-level home would be ideal. She should also be accompanied when getting on or off furniture; it’s best if she is lifted.

Lina had a test that identified some allergies. Currently, she is fed a combination of homemade food and Freshpet to keep them under control. It’s possible she can be transitioned to only FreshPet which her foster family is working on. Lina also receives daily supplements, which would ideally be continued in her forever home. She has received Cytopoint injections for allergies in the past, but currently does not require it. Lina is an assertive alpha female and doesn’t share food or toys well with other dogs. If you feel your resident dog might be a good fit, let us know more about your dog’s personality and how you would keep everyone safe. No small dogs and no cats in Lina’s forever home please.

Lina loves children and, if she were reviewing applications, she would prioritize those who have children who like to rough house; but since her bifocals haven’t come in yet, we’ll be reviewing the applications. A household with older children who understand the need to be careful of her back (meaning no rough housing) would be most appropriate. Lina seems to be the perfect mix of active (walks and fetching sticks) and relaxing (sleeping, napping). She did tell us she needs at least a few stuffed animals that have a firm cloth end on which she can suckle. Can you envision that cuteness?

Due to Lina’s previous back injury, walking on firm surfaces is best for her hind-end stability. She loves walking when it’s not too hot, and keeping her active with a strong core will help with her back health. Due to her incontinence, it would be best for Lina to have someone who is home most of the time. She could be left alone for up to four hours at a time but, if you ask her, she’d much rather try coming to work with you! She can be a bit vocal at first but should settle. Hey, it’s a solid option if you don’t work from home.

Foster mom wants you to know, “Lina is a love! You would never know she is a senior, but sit down to read or rest and she will join you on the bed or couch for a rest as well. Her morning routine consists of a walk and breakfast and then she is ready for a little play time. The rest of the day she will be your shadow and best friend. Always have some cantaloupe/watermelon, apples, or cucumbers available for a treat. She does play with toys and seems to enjoy an ever-rotating set of them. She will bark at you to give her a choice because 1 toy is not enough. She loves her walks and rides in the car. An elevated car seat does the trick so she can watch things from the window safely. She has a toe fetish when she is frisky, so watch out bare-footed visitors. And for the visitor that does not love a jumping, kissing machine, her new owner might need to consult Miss Manners and clue Lina in to what is refined versus tolerated for a mature Frenchie.”

Lina won’t fly, even in-cabin, so if you feel a spunky senior would be a great addition to your family, fill out an app and get out the ol’ MapQuest turn-by-turn directions to northern Virginia. FBRN does not ship dogs as cargo, so adopters are expected to pick up their dogs from their foster family.

Lina has IVDD and must be monitored for flare-ups. She must always be carried up and down stairs and must not be allowed to jump on or off the furniture.

Lina is fecal and urinary incontinent and may need to remain on daily Proin.

Lina has several allergies and must remain on regular Cytopoint injections. Also, please note food allergies in the attached report. It is important to make sure food ingredients do not contain her allergens.

Lina has a history of UTI and ear infections and must be monitored for recurrence.

Lina has exhibited aggressive behavior toward dogs that will require continued training to address. She will need slow introduction to small/medium dogs and should never be around large dogs.

Please buy yourself a few new stuffies on us in memory of Our little lady Laya who used to be a big de-stuffer herself.

For Lina – thank you for sharing your foster parents with Hugo! Best wishes!

Thanks for caring for Hugo.