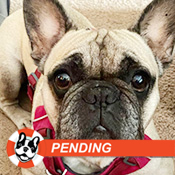 “Moira is a sweet girl who loves people and just wants love in return. With her originally coming from a breeder and only being with her first family for several months, she hasn’t known consistent love. She has her weird quirks (humping and licking ears), but she is still learning manners and how to be a dog. I think in the right home with someone willing to continue her progress, she will blossom into an amazing best friend for someone or a family.”

Following the advice of her namesake, “one must champion oneself and say, I am ready for this”, stunning Moira is gracing the available page! And she is ready. This not-so-little bébé was surrendered when her former family realized they couldn’t provide the quality time Moira needed and deserved. Just as the people of Schitt’s Creek embraced the Roses, FBRN warmly welcomed Moira to their family.

Moira is a sweet and sassy gal who, like many brachycephalic (smoosh face) breeds, arrived with breathing problems. Thankfully, she underwent successful nares and palate surgery while in foster care and her breathing has improved. Moira must always wear a harness when on walks and never have anything around her neck which could constrict her airway. She doesn’t require much exercise and would prefer to be inside chewing on Nylabones and playing with balls. She will even self-entertain when she gets a burst of energy, throwing the toys for herself! So talented and cute, our Moira!

When it comes to people, Moira loves them – sometimes too much. She has been known to try to hump and lick the ears of the kiddos in her foster home, and she will need continued work on her manners. Any children in Moira’s forever home should be sturdy and at least 12 years old so they won’t be bowled over by her strength and enthusiasm. When it comes to dogs, Moira’s more of a lone wolf so if you’re looking for a playmate for your pup, Moira is not your match. She currently lives with three canine foster siblings, but was involved in a quibble or two in the beginning. She’s done well with one of the resident dogs who is mellow, neutral, and nonreactive. Any potential fur-sibling should have those same characteristics to prevent any quagmires. Moira is a resource guarder who thinks her food and sometimes her people should not be shared. To keep everyone safe, she should never be around smaller children who might drop food which Moira might claim.

Moira prefers to be around her people all the time. She has some separation anxiety and can clear regular height baby gates, but she isn’t destructive. When you’re home, you might hear her cute bark when she wants to eat or wants your attention. When you leave, you might hear her clangorously vociferous bark song! Apartment living with shared walls isn’t her thing. She could settle into an office setting after she gets over the excitement of meeting all the new people! Experienced dog owners would be the most propitious and favorable applicants for Moira so she can continue to learn manners and not get away with things that aren’t allowed. She also needs to be kept on a strict and frequent potty schedule to prevent accidents in the house. Moira doesn’t do well in the crate.

Her foster mom wants you to know, “Moira is a sweet girl who loves people and just wants love in return. With her originally coming from a breeder and only being with her first family for several months, she hasn’t known consistent love. She has her weird quirks (humping and licking ears), but she is still learning manners and how to be a dog. I think in the right home with someone willing to continue her progress, she will blossom into an amazing best friend for someone or a family.”

If you think you might be a perfect match, confabulate with any family members and then apply for this quirky diva. Moira is too big to fly, but thanks to her time in foster, she has learned to do quite well in the car (but maybe bring a doggy sick bag if it’s a long trip because she has gotten car sick before). So pack up your extensive wig collection and plan your trip to Texas because FBRN does not ship dogs as cargo. Adopters are expected to pick up their dogs from their foster family.

Moira has brachycephalic airway syndrome. She had nares and palate resection done on 07.02.2021. She must wear a harness when going for walks, never a collar or choke chain.

Moira is a resource guarder so must never be around small children.

Moira’s liver enzymes (AST) were elevated on 05.05.2021, and she was started on Dogzymes Liver Support and Wysong Biotic PH. Her liver enzymes should be regularly checked.

Potty training is a work in progress.

In the wise words of your namesake, “When one of us shines, we all shine!” Shine bright, Moira!

Oh sweet Moira! We would take you in a heartbeat! Our two others would love you! Hope she finds a great home.

Hi sweet Moira! When I saw your name (my fav show!) and sweet face I just couldn’t resist! Good luck on your new journey to finding your new furever family! Sending you love from FL 🙂

Moira, you sweet girl, FBRN will take care of you and find you another home soon. Tell them to use this to buy you some comfort food and toys!

Here’s to the lovely Moira! Get lots of goodies to enjoy your foster home until you find your forever parents! Lots of Love.

Hey Moira! We would love to have you with our family.

You are a beautiful girl and we are frantically refreshing your page to apply for you. Until then, hope this helps to keep you safe and super happy!!!