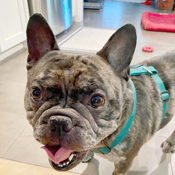 “Yeti is a big goofball, so happy and loving. He has the cutest wiggle butt dance when he sees you, whether you were gone all day or just in another room. He looks at you with hearts in his eyes when you give him attention and just soaks up all the love you can offer. He is well behaved, quiet and loyal. We have enjoyed having him so much.”

If you have been hoping all your life to spot a real-life Yeti, and maybe even have one of your own, your search is over! FBRN’s coolest Yeti has come out of hiding and he’s making his debut on the available page. This 4-year-old cutie is now ready to find his forever family

Yeti’s fosters are enamored and want you to know, “Yeti is a big goofball, so happy and loving. He has the cutest wiggle butt dance when he sees you, whether you were gone all day or just in another room. He looks at you with hearts in his eyes when you give him attention and just soaks up all the love you can offer. He is well behaved, quiet and loyal. We have enjoyed having him so much.”

Yeti may have some occasional zoomies,however, he is usually quite laid back. While crate trained, he is learning to appreciate sitting on laps and lounging on the couch watching TV. He likes to spend his time hanging out with the family, getting pets and chewing a bone. He loves to chew and is a powerful chewer who can destroy a stuffed toy, even a “tough” one, in a matter of minutes. It is helpful to have a variety of Nylabones and other chews around for him.

Yeti could thrive pretty much anywhere as long as he has attention from his people. City, country, house, or apartment, he’s not picky; but if he’s in a climate where it gets very hot, extreme caution will need to be taken so he never overheats. Yeti would love a stay-at-home family but knows that some of us have to work, so he would be okay with a midday break. He would likely acclimate well to an office setting because he is just so sweet and quiet. He is perfectly housetrained.

As you can see, Yeti is not only rare in namesake but also in color. And with that designer color comes some health problems, but he doesn’t let that get him down one bit. Dogs are amazing like that, aren’t they?

Yeti has several allergies which are managed with a couple of supplements, Cytopoint shots, special food, and regular medicated baths. His new family should be committed to continuing this regimen to keep his allergies under control. Yeti also has brachycephalic airway syndrome and moderate laryngeal collapse. Due to these issues, he must never become overheated or overexcited, no matter how cute his zoomies are, and his breathing must be carefully monitored during play or exercise.  When on walks, he must never have any pressure around his neck like a collar, slip lead, or choke chain. So, it is harness walks only for this beautiful boy! He is actually fine with a short walk around the block or sniffing around the backyard.

Yeti has never met a person he doesn’t like and he’s just as sweet as they come. His former family said he had shown some potential resource guarding behavior and although his foster family has nor seen any behaviors like this, it is probably best for his forever home to not have small children. Even without the potential to guard food or toys, slightly older children will be better equipped to handle the 34 pounds of excited zoomies that Yeti can gracefully display at times. He has done very well with children and we think he would really enjoy living with a dog-savvy young person.

While Yeti’s foster family has not tested him with dogs in the home, he has met dogs while leashed on walks with foster family and has shown no aggression and is rather indifferent to them.He is also not reactive to the barking neighbors dogs through the fence. If his new family does have another dog, the intros have to be slow as he was noted to not get along with the unaltered male in his previous home but did fine with the female. Also,  play sessions, whether with dogs, kids or adults, should be kept short to prevent any potential breathing issues from over-excitement. His foster family reports that he has a very low prey drive and did well with the cat, chickens, baby goats, and a rabbit in his temporary vacation foster home – so there is potential if you have any of the aforementioned animals.

If you have been living in the Himalayan mountain range in Asia, searching for the elusive yeti, you’ll have to move to the US or Canada if you wish to adopt our Yeti. He is too big to fly but does really well in the car so plan your road trip to Texas. If you are chosen as his new family and have a very long drive, check the weather forecast and just keep any warm temperatures in mind for his comfort and well-being. He thanks you for reading all about him and hopes to see one of you in the near future!

FBRN does not ship dogs as cargo. Adopters are expected to pick up their dogs from their foster family. In rare or unusual cases, FBRN may be able to assist in transporting a dog to a volunteer near the adopter’s home, but the expense of transporting the dog must be the responsibility of the adopting party.

Yeti has brachycephalic airway syndrome. He had his nares widened, a soft palate resection, and saccules removed on 09.01.2022, but remains mildly symptomatic due to a moderate laryngeal collapse that is not treatable. Therefore, his breathing must be monitored during exercise or play. He should never get overheated or overexcited. He must wear a harness when going for walks, never a collar or choke chain.