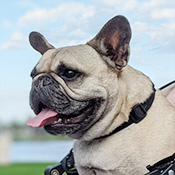 Let’s all give a warm welcome to our newest man, Davis! This 5-year-old boy weighs in at a whopping 30 pounds. He was surrendered to FBRN when his previous owners realized they were not prepared to care for him if he ruptured a disc again. You see, back in 2019, Davis ruptured a disc and underwent surgery and rehabilitation. After a recent scare, the possibility of another injury became very real and his previous owners felt ill prepared to manage.

Davis definitely has some stability issues and potentially IVDD (intervertebral disc disease) which is common in Frenchies. Currently, he takes medication for anxiety and also for allergies. Davis has an upcoming vet visit, and we’ll have more to report after that. We are envisioning physical therapy and maybe even a more balanced diet in his future. Ah, diet and exercise; two things most of us are familiar with!

All this health stuff aside, Davis is a sweet guy who loves his people. Especially the people who oblige and give him belly rubs when he rolls over! Davis enjoys afternoons on the lanai where he can leisurely watch the world go by, and he also enjoys playing like a maniac! As of yet, he hasn’t met the resident dogs, but we’ll have more to report on that once he’s settled in. Davis seems to be perfectly potty trained and hasn’t had any accidents in his foster home.

If you have been hoarding all of your change during the past year, please consider donating a bit to Davis for his medical care. All you need to do is click on the link to sponsor him!

Best of luck Davis! – with love from

Keep at it buddy, only the best wishes for the future.