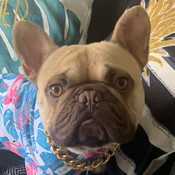 There’s a new man on the block and his name is Tupawc! This handsome 4-year-old fawn guy has had a rough start. He was adopted from a rescue in July and was reported to have gastrointestinal issues. His previous owner noted he was becoming aggressive towards other dogs and without the time to devote to this boy, he was sadly surrendered to FBRN.

The swagger is real with this one: when he needs to walk to the side, he does so in a zigzag, without bending his body. Almost like a dancing horse struts! He’s also proven to be a smartie pants and shown that he can learn commands quickly.

So far, Tupawc hasn’t had interactions with other dogs. We’ll have more to report after he’s settled into his foster home. He is super friendly with all the people that he’s met, and he loves the royal treatment he’s getting during meal times. Tupawc seems to be a very picky eater. It’s not that he dislikes food, he rather loves it. He just regurgitates and throws up almost every time. We’ll be getting him right into the vet so we can get to the bottom of it. In the meantime, Tupawc is enjoying the organic chicken and neck rubs that foster mom gives him to help with his tummy troubles.

If you have some spare change collecting in a cup holder, then please consider donating it to Tupawc for the cost of his vet visit. All you need to do is click on the link to sponsor him.

For Tupwc hoping your GInissues get resolved or at least manageable. I had a human child that suffered from INS so we can relate. Hang in there handsome.

Tupawc, you are tucute! Sending lots of love and healing for you.

Hey Little Big Man! You just stole my heart. I will be keeping an eye on your progress and helping out when I can so you hang in there heart.

Donation to FBRN – For Tupawc