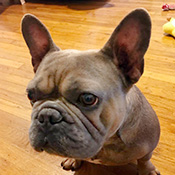 Look who has thundered his way onto the FBRN foster page: strikingly handsome 3-year-old Zeus! A retired stud dog, Zeus sustained a back injury at some point and was adopted to a working couple unsuspecting of the extent of his mobility issues. They surrendered him to FBRN once they realized the time and care Zeus truly needed.

Does Zeus’ hind-end weakness and occasional urinary incontinence slow him down? No way! Foster mom says he wakes up happy, rearing to go! He’s the sweetest thing since apple pie and doesn’t realize his limitations. Tipping the scales at 30 (glorious) pounds, he will join the millions who have resolved to shed some weight this New Year.

While Zeus settles into the routine of foster care, he can almost hear all of the oohs and aahs broadcast through the internet caused by his cuteness. But looks alone won’t pay the bills and he has vet visits in his future (has crusty, scabby ears and is still intact – ie. has his marbles). It’s a brand new year so if you budgeted any money under the category “helping an absolutely adorable and worthy rescue Frenchie named Zeus,” now’s the time to click his link and donate. He thanks you with thunderous “appaws.”

ZEUS WHERE ARE ALL YOUR FAN’S, YOU SHOULD HAVE DONATIONS POORING IN WITH THAT CUTE FACE OF YOUR’S. COME ON LA SHOW YOUR SUPPORT. LA’S WHERE ALL THE STAR’S ARE.

Get well soon cutie !!! Zeus is adorable I hope he continues to recover !! I am rooting for you handsome

Some Other Sponsors Name