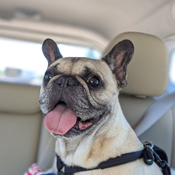 “Davis is a large, lovable guy (“big boned” his vet says, but he is not overweight) at 31lbs. He is a total character who has brought a lot of joy to the house. While he’s not a snuggle bug or a lap dog, Davis is very affectionate and sweet. He loves to play with toys, sunbathe, and just watch the world go by. He is mostly well-mannered and all the neighbors love him.”

“Davis is a large, lovable “big boned” guy at 31lbs. He is a total character who has brought a lot of laughs and joy to the house. He has now been with us for over a year, and he has grown more affectionate, dare I say a bit of a snuggler? But it’s belly rubs over everything. He is the ultimate attention-seeker. He is very friendly, playful, sweet, and very popular with all the neighbors, but he is also protective (of us and the house) and a resource-guarder so he needs to be an only dog. What could be more perfect for a dog who demands to be the center of attention! He has made great strides (pun intended) since his arrival and in cool weather, he gallops. It’s the most adorable thing!”

Our favorite cinnamon bun, Davis is ready to spice things up and find his forever home! Davis is a special boy looking for a family with previous Frenchie experience who will understand his special needs.

Davis is one of the happiest guys around. He loves everyone he meets and greets them with a smile before flopping over for a belly rub. He is not shy! He does his daily rounds around the neighborhood in his stroller then walks along a specific part of the sidewalk to say hello to his favorite trees. Davis has IVDD, a spinal malformation (which cannot be corrected with surgery), and limited mobility in his back end and he can walk on his own, but he does not walk like a super model. His foster family wrap his feet in vet wrap to avoid scrapes and bloody toes and it also gives him additional traction (it’s also called fashion!). Having said that, he cannot go on long walks (his foster family limits his exercise so that the does not overexert himself causing injury) and he has an Eddie’s Wheels cart for long walks. He doesn’t mind it, but they think he’s confused by it because he knows he can walk. They expected him to take off like his FBRN counterparts, and every now and again he does, but he also tries to rollover in it to get belly rubs. Davis has no shame; he knows what he wants!

To maintain his health, Davis takes several medications and supplements daily. He also eats a special diet due to his sensitive stomach and food allergies. Otherwise, he is very well behaved and potty trained. He has not had any accidents in the house and lets his foster family know when he needs to go out. He sleeps in a dog bed next to the human bed at night and knows a few commands that are appropriate for a dog with limited mobility.

Davis will do well in just about any type of environment, but his forever family will need to “Davis-proof” their home. Right now, the majority of all the tile flooring in his foster home is covered in yoga mats so he can walk everywhere. Areas with thicker carpeting are his favorite because they are best for his “army crawls” and of course, rolling around on carpet is an all-time Frenchie fave. Davis cannot and must not do any stairs. When he first arrived, he was carried out to the grassy areas to do his business but now he walks. He has done several road trips, including to New York City and while he is adaptable to different environments, he doesn’t understand anything but using grass to (or a tree) to leave his mark (so a regular ol’ curb won’t do). Davis isn’t a fan of being in the car but has gotten better over the past year and after the first pit stop usually settles into his car seat. He cannot be given tranquilizers because it affects the use of his legs – not good for a dog that already has mobility issues!

The perfect home for Davis will not have other pets. Davis is very inquisitive with all the neighborhood dogs and has done fine on leash around them. However, Davis is a resource guarder when it comes to food and should be the only pet in his forever home. Also, he is reactive to certain noises so expect him to bark at unfamiliar sounds like the doorbell (the real thing or on TV), however he is not bothered by fireworks, storms, thunder, lightning, or hurricanes (a plus living in Florida!).

It is very important that Davis’s forever family be VERY protective of his back. Ideally someone who is an experienced Frenchie owner or has experience with dogs who have IVDD or spinal issues. Davis will do best in a home with more than one person, especially since he is quite heavy to lift or carry and he can be high maintenance. Realistically, it’s a lot for one person to manage! He does not like to be left alone and takes anxiety medication, so it would be ideal for his forever family to have someone home all day. Davis could accompany his human to the office, but the office floor may need a bit of remodeling to ensure Davis could get around (or the use of vet tape). Like most Frenchies, he is very nosey but that anxiety may have him velcro’d to his human’s side (at least at first).

Davis has IVDD and must be monitored for flare ups. He had surgery in September 2019 prior to coming to FBRN. He has spinal malformation and limited hind end mobility and must always be carried up and down stairs and must not be allowed to jump on or off the furniture. He has a cart for supervised use to help with mobility. He must remain on Pregabalin and L-Carnitine twice daily.

Davis suffers from anxiety and must remain on daily fluoxetine.

Best of luck Davis! – with love from

Keep at it buddy, only the best wishes for the future.

For the last donation: We love you Davis! From Ollie and Abby