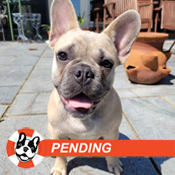 “Mac is a joy to be around; he’s such a sweet and happy boy. All he wants to do is play, eat and occasionally sleep. He may not have hip sockets but he doesn’t know that and so far it just doesn’t bother him. Whatever he may need in the future as far as treatment he is totally worth it, he will definitely pay you back with unconditional love!”

A delightful little French treat has landed on the available page! Macaron arrived into FBRN care when he wasn’t getting along with his littermate. His previous owner may have also been concerned with his luxating hip diagnosis and the potential for future issues.

Macaron currently shows no symptoms of the luxating hip or bilateral hip displasia, but adopters should know that he’ll likely need treatment in the future. This treatment could include physical therapy and acupuncture. Due to Macaron’s hip issues, it is crucial that he remain fit and never become overweight.

Other than his hips, Macaron is fit as a fiddle! He’s completely unaware that he has hip problems and he loves to run and play, especially with other dogs! His days are spent wrestling and running around with his furry foster siblings. Toys are also a big hit with Macaron. He’ll happily fetch a toy for you and is also down for some tug-of-war. If there’s a cardboard box around, Macaron is more than willing to assist in dismantling it!

This cutie not only loves other dogs, he’s also a big fan of kids! A busy house with a lot going on would be great for Macaron. He likes to be involved in everything and is ready for anything. He’s never met a cat, but foster mom thinks he’d chase them and try to play. According to his foster mom, Macaron would play for twenty hours if he could! But there does come a point in the day where Macaron needs to recharge his batteries.

A typical Frenchie puppy, Macaron is full of energy with a sprinkle of mischief! While Macaron is a friend to all dogs, his energy can be too much for some. Like the good boy he is, Macaron responds well when other dogs say “scram!”, but he may do best in a home with another younger, more active dog.

Macaron would thrive in a house with a fenced yard, but an apartment could also work for him, as long as his family took him out regularly for exercise. Being a puppy, Macaron can overexcite and be mouthy. With some maturity and training, he should be great with children of all ages; for now dog savvy older children are preferred. Macaron’s foster family is teaching him how to use bells by the door to signal that he has to go out to potty. It would be great if his forever home was familiar with this training method, and willing to continue his training. Right now, Macaron sleeps in a crate and does just fine, but once he’s house-trained, this little French delectable will be waiting for his invitation to sleep in the human bed!

Macaron is handsome and helpful! Speaking of helpful, did we mention that he’ll accompany you to work? It might be hard getting anything done with such a cute little frog around. Except for not being completely housebroken, Macaron does well when left during the day with free roam of the house. He’s not a fan of the crate and with as much energy as he has; it’s not a good idea to keep him confined. Once he is completely housebroken, he should be fine having a dog walker come for mid-day breaks.

Here’s a few words from his loving foster family, “Mac is a joy to be around; he’s such a sweet and happy boy. All he wants to do is play, eat and occasionally sleep. He may not have hip sockets but he doesn’t know that and so far it just doesn’t bother him. Whatever he may need in the future as far as treatment he is totally worth it, he will definitely pay you back with unconditional love!”

Macaron was born just two days shy of Valentine’s Day, so if you’ve been struck by Cupid’s Arrow, please apply for him today! Macaron is growing quickly and may not do well in a small carrier if traveling by plane. Though it’s not a deal breaker, a commercial flight isn’t ideal for this little active boy. Macaron would love traveling by car and will gladly be your co-pilot.

FBRN does not ship dogs as cargo, so adopters are expected to pick up their dogs from their foster family.

Macaron is an active puppy and potty training is a work in progress.

Macaron was previously diagnosed with a luxating hip (left) that is currently asymptomatic but must be closely monitored. He should remain on Dozymes Phyto-Flex once a day.

Macaron has a history of giardia that must be monitored for recurrence. He should remain on Dogzymes Probiotic Max once a day.

Hi Macaron. What a cute boy you are. I pray FBRN finds you a loving home soon!

You are such a sweetheart Mac! Those ears couldn’t be cuter!!

Prayers for Macaron and that his future may be Blessed with a wonderful home!! Keeping an eye on this sweet boy!