Things You Should Know to Keep Your Frenchie Safe

Spanky: Ate an entire box of raisins and had his stomach pumped at the vet clinic.

1. Out of the deaths in cargo holds the airlines reported over the last 5 years, almost half were Brachycephalic, or smush-faced, breeds. Most airlines won’t carry dogs when temps are high. If you are traveling and you must take your

Frenchie, make sure your frog rides in cabin with you. Read about it here.

2. People may doubt this is true, but don’t give your dog grapes or raisins. Dogs can have a reaction to as few as 7 or 8 grapes that will cause kidney damage and, possibly, death. If you have kids, be sure to tell them not to share, and don’t leave grapes out. Onions can also be deadly to your dog.

3. Macadamia nuts are a little-known addition to the ‘do not feed’ list.

4. Though by now most people are aware that chocolate, especially dark

Rosey: Rosey ate a bag of dark chocolate chips and spent the night with the vet.

chocolate, can be deadly to your dogs, you should also know that the mulch made from cocoa should probably be avoided. Though the risk depends on the brand you buy and the size of the dog and whether the dog is likely to eat mulch, there are so many other kinds of mulch that it seems not worth the risk.

5. If you live in the southernmost areas of the US, you have particular dangers to be aware of. The bufo toad is one of them. The bufo toad, or cane toad, was yet another brilliant idea gone wrong in the annals of foreign animal introduction. Used to control bugs in sugar cane fields, the bufo toad quickly moved off the fields and into the suburbs. Some of our volunteers 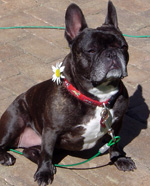 Josey: In Florida, Josey crossed paths with a bufo.

have had dogs that enjoy catching toads and they must be vigilant about not allowing their dogs to catch bufo toads, which can poison and kill or harm their dogs very quickly. See this link for more information on how to give first aid to a dog who catches a bufo toad. People who live in more northern states have ordinary toads who may also give off a substance that causes foaming at the dog’s mouth, but won’t harm them. One of our volunteers has to regularly remove toads from her dog, because their unpleasant taste does not deter the dog from catching them.

6. The sago plant is also deadly to dogs, and is a commonly used landscaping plant, particularly in the south. Are you thinking of landscaping? The ASPCA is compiling a list of toxic plants. The ASPCA also has an Animal Poison Control Center hotline at (888) 426-4435. There is a charge to call.

7. Tea tree oil, though touted for its anti-bacterial, flea-fighting and healing

Winston: Had a terrible reaction to tea-tree oil and nearly died.

qualities, may cause neurological damage to your Frenchie and might well kill your cat. One of volunteers used undiluted tea-tree oil on her Frenchie and almost lost him. Though we applaud the use of many herbal treatments, and the danger of tea-tree oil diminishes if the oil is diluted, our advice is to use something else.

8. Your toothpaste could kill your dog. Pretty silly lead-in, but it’s true. Many dogs love mint, and some of our dogs will go to great lengths to get to the toothpaste tube or into our handbags or pockets or even up on the counters to get at the source of that great minty smell! Unfortunately, many mints, chewing gums and toothpastes contain an artificial sweetener called xylitol, and eatingxylitol can be deadly for dogs. We recommend extreme vigilance with products that contain xylitol. Consider going for a sugared vs. sugar-free version of mints, chewing gum and other candies. And never use a people toothpaste to brush your dog’s teeth!

9. You can buy a seat belt for your dog. So many of us just load our dogs into the car without giving them any restraint or harness at all. It’s nice to have them on the front seat beside us. But we know better, and in a crash a dog can become a missile and cause injury, or he can escape from the car and be lost. There are a great range of car seats, restraints and screens for your car. Remember that if a baby can get injured or killed by an airbag, your Frenchie could, too. (Other things to have in the car: cool coat, water, ice and working cell phone in case your engine overheats or your a/c up and quits.)

10. If you haven’t seen one before, a Frenchie in a lifevest looks pretty silly. But most bulldogs are bricks when they hit the water. If you are going to the river, lake, or ocean, please put your dog in a lifevest. Even if you are going to the backyard to hang out by the pool. Put a vest on your dog. It only takes a minute for you to go in to the house for a beverage and take a phone call, and your Frenchie could be lost. Every summer we hear of at least two of our adopted dogs who’ve drowned. It breaks our hearts.

11. Raw Salmon. Even if you are a pretty well educated raw food feeder, you may not have heard of this. The problem is a critter that rides along on a parasite that the salmon picks up from a freshwater snail. If you live in the Pacific Northwest and come across salmon innards a lucky fisherman left behind, or you want to offer a bit of raw salmon to your dog on a fishing trip, don’t do it. Cooked salmon is fine. Another reason not to let your dog roam offlead.

12. Mushrooms. Maybe not strange, but it’s true that the same Death Cap mushroom that can kill you can kill your dog. Recently, most deaths from Death Cap mushrooms have been in northern California and Oregon. There are other mushrooms that will just make your Frenchie sick, but if you are out walking where there are likely to be toadstools or mushrooms, keep your dog on a leash. If he eats something before you can stop him, at least you can take one home with you to show your vet.

13. Dental floss. I had a dog who needed surgery because she got a box of

Cloey: Ate a spool of mint-flavored dental floss and had $3,000 surgery.

mint-flavored dental floss and ate the the whole wheel of floss except for the several feet that were hanging out of her mouth. Floss can cut through your dog’s intestines and dump all the contents of their intestines into the abdominal cavity. Dispose of your dental floss carefully’now I flush mine’and maybe choose a floss that is not flavored.

14. Dog doors. The AKC reports that dog thefts are on the rise. Dog doors may be one way thieves are finding it easy to get at dogs. Even people with high brick walls you wouldn’t think thieves could see over are coming home to find one or more of their Frenchies are gone. Dog doors can be a great convenience in terms of housetraining, but at least judging by the stolen dog reports we’ve gotten, if you live in California or Texas, beware. Dog thieves are looking to take your dog.

Sure, you may never run into a cane toad, and maybe you wouldn’t know a sago plant if you fell over one, but we wanted you to know about this stuff. Until someone told us or we found out the hard way, we didn’t know, either.