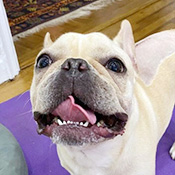 Look who’s buzzed into FBRN—it’s Aldrin! We’ve only had this little cream puff for a few days, but we already love him to the moon and back.

Aldrin was surrendered to a veterinarian after suffering a severe back injury. He underwent emergency surgery, and we are pleased as punch to report that he is WALKING! In fact, the surgery went almost too well, as Aldrin wants to be up and about—back staples be darned—and is none too pleased about this “crate rest” nonsense. Foster mom reports that he is doing great on his (very short) walks, and that he is equally skilled at giving her the stink-eye when she puts him back in his pen. Hang in there buddy—it’s for your own good!

Aldrin’s been through a lot over the last week, so it’s not surprising that he’s presented some challenging behaviors. He has yet to pee outside (“isn’t that what the floor is for?” asks Aldrin) and has been very picky with his food. Aldrin also lacks social graces—he is super interested in other dogs, but we’re not certain yet whether he wants to play with them or bite them. Fortunately, at only one year old, Aldrin has plenty of time to figure things out. Right now, the number one priority is getting his back healthy—the rest will come later.

Aldrin’s surgery was very expensive. On top of that, foster mom is breaking the bank to provide an adequate supply of stuffies, which Aldrin likes to tear apart with a slightly psychotic look in his eye. So if you’ve got a few extra bones (literal or figurative) for Aldrin, please consider becoming his sponsor! Aldrin and all of us at FBRN thank you for your support.

For Aldrin, in memory of the sweetest girl Lily! Oso and I sending our love to the entire Marques family!

For Aldrin In memory of Jose

For Aldrin and his medical expenses!

Sorry my family missed out on contributing to your wish list, but we’re sending you a little something to help with your chew addiction.

For sweet Aldrin in NY. Love

For Aldrin. Get yourself some chew toys!

Get Aldrin some stuffies to destroy!! Love

Aldrin, stop barking at Bucky and his parents! Get better soon!

support Aldrin, they said the Creams have to stick together . .

Hello, Handsome! Get yourself some toys! Much love from

Donation to FBRN – For Aldrin

Donation to FBRN – For Aldrin

For toys or bones fit Aldrin. My wife and I just love this little guy!