Recently, FBRN has seen an increase in surrenders of fad-color Frenchies. Many of these dogs have health issues that must be addressed before they can be adopted. That is nothing new for us. Many of our foster dogs require extensive vet care regardless of whether or not they happen to be a fad color. Indeed, it is difficult to say whether the increasing surrenders of fad-color dogs are due to health problems related to the dog’s coloring, or if there are just more fad-color dogs in the general population. Regardless, we feel that we, as a group dedicated to the well-being of French Bulldogs, should address the issue of fad colors.

First, let’s define the term “fad color”. Also referred to as “non-standard” colors, “fault colors” and (by unscrupulous breeders trying to sell dogs for inflated prices) “rare” or “designer” colors, a fad color is any color that does not conform to the breed standard. According to the French Bulldog Breed Standard published by the American Kennel Club, the acceptable colors for the French Bulldog are white, cream, and fawn (ranging from light fawn to a red fawn). Allowable markings and patterns are: brindle (yep, brindle is a marking pattern, not a color), piebald, black masks, black shadings, and white markings. Dogs of any other color and pattern do not meet the breed standard.

And yet some breeders loudly proclaim that they specialize in “rare colors”. Website upon website advertises blue, blue fawn, chocolate/liver, Isabella/lilac, merle, sable, black, black and tan, blue and tan, blue brindle… the list goes on. We would be only mildly surprised to see “highlighter yellow” or “bubblegum pink” Frenchies hit the market at this point. 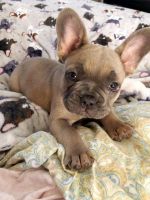 The proliferation of fad colors is so recent, we do not yet know what health problems might be associated with each new color. What we do know so far is:

• Blue and lilac coat colors are the result of color dilution, which is caused by a recessive mutation in the melanophilin gene. A rare skin condition called color dilution alopecia, in which excessive pigment clumping causes breakage of the hair shafts and abnormal or stunted hair growth, seems to affect only dilute-colored dogs. There are currently three known variants of this mutation, but it is assumed that there are others that are as yet undiscovered, because the known variants do not account for all color dilution in the French Bulldog. It is too soon to tell what health effects might come part and parcel with these unknown variants.

• Pure black French bulldogs with the dominant black (K-gene) mutation of the CBD103 gene will pass it on to their offspring. This can eventually wipe out all fawn in the bloodline… No more fawns, no more brindles, just black. Solid black dogs are not the only ones who could cause this phenomenon. Solid blue and lilac dogs could also have the dominant black mutation in combination with a dilution mutation, and would also eventually wipe out the traditional coat colors.

• According to the UC Davis Veterinary Genetics Laboratory, merle dogs, especially “double merle” dogs, have an increased chance of deafness and serious eye abnormalities. Additionally, double merle dogs can have multiple abnormalities of skeletal, cardiac and reproductive systems. It should be noted that the purebred French Bulldog gene pool does not carry the merle gene. All merle “French Bulldogs” have been produced by introducing another breed, usually a chihuahua, into the mix.

Is it possible for a breeder of fad-color Frenchies to produce relatively healthy, sound dogs? Yes. A fad-color breeder can employ scrupulous selective breeding and genetic testing. It seems, however, that the majority of fad-color breeders are not selecting for healthy, conformationally sound bloodlines. They are not investing in the health and genetic testing commonly practiced by reputable breeders. They are merely breeding dogs that carry a certain color because they can convince members of the public to pay exorbitant prices for dogs with an unusual appearance. They are driven by profit, not a commitment to produce healthy dogs.

Let’s face it… French Bulldogs are not among the healthiest of breeds. They have a well-documented high incidence of allergies, intervertebral disk disease, hemivertebrae, hip dysplasia, brachycephalic airway syndrome, cleft palate, and so on. This begs a couple of questions. Firstly, why introduce further risk factors? Secondly, if some breeders are selecting for coat color above all else, aren’t their puppies more likely to suffer from the myriad of health issues that conscientious breeders are trying to weed out of the gene pool? Is that why we are seeing an increased number of fad-color Frenchies in rescue?

Obviously, we are not trying to discourage people from applying for a fad-color rescue Frenchie if they feel that they can offer the little guy or girl a great home. That dog will have been spayed or neutered, so she or he will not be propagating the potential problems. Besides, s/he is just as deserving of a second chance at a good life as any of our other little frogs. We just ask that people be cognizant of the potential for far-reaching damage that irresponsible breeding and fad colors can cause to the breed we all adore.

For more information about fad colors in the French Bulldog, please visit the following: