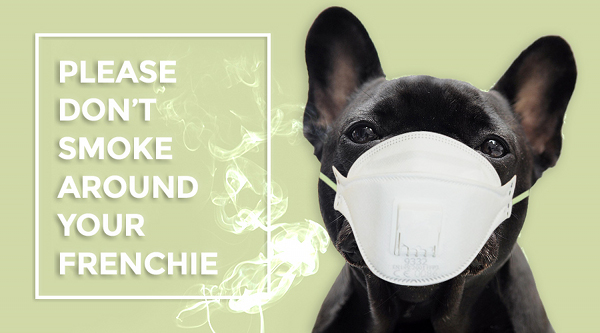 Brachycephalic dogs and cats are already prone to respiratory problems, and if you smoke around them in an enclosed space, like a well-insulated house or car, cigarette smoke can make their problems worse.

We might know or assume there’s an increased risk of lung and nasal cancer in animals who live with smokers. Dogs living in a smoky environment have a 60% higher risk of getting lung cancer—and those numbers are likely higher in brachy dogs, like Frenchies. Imagine hearing that your dog has a cancer that is likely caused by your nicotine habit. The guilt would be terrible. And so awful to watch your dog suffer!

Here’s a story told by one of our volunteers who adopted a dog from a family of smokers: “I adopted a retired show champion at age 4 from a couple that both smoked, and immediately noticed breathing problems, but it was not his nares or palate. His diagnosis was a scarred, severely narrowed trachea. He had to be managed medically, and we added one med after another. He was retaining fluid around his lungs and heart, so he was on lasix. (Aside form the dog’s obvious discomfort, think of the inconvenience of a dog on lasix, a diuretic!) To help move more air, he was on oral theophylline (a bronchodilator) and an albuterol inhaler (albuterol interacts with neurotransmitter receptors, and side effects include racing heart rate and muscle tremors). Frequent bouts of pneumonia required heavy-duty antibiotics. Toward the end he had a home nebulizer chamber for the albuterol, and we added a flonase inhaler.

Both his regular vet and the cardiologist were very clear that in their opinion the problems were created by exposure to second-hand smoke during the first several years of his life. In the end, the drugs he needed to breathe were causing seizure activity and it was time to say goodbye, just shy of two years after he joined our family. Frenchies have enough inherent problems with out adding to them, so please think about how your behaviors are affecting your pets.”

But there’s more than the smoke to worry about: particulates from cigarettes cling to every surface of the house—the dogs’ beds, the couch, the carpet—everything they touch. Those particulates stick to pets’ coats, too, and the animals ingest them as they clean themselves.

And as if Frenchies—already susceptible to allergies—needed another source of dermatitis, cigarette smoke is linked to allergic dermatitis as well.

No doubt you know this, but ingesting nicotine can kill an animal, so be alert to nicotine dangers even if you aren’t a smoker; don’t let your dog chew on a discarded cigar butt he may find on a walk. After a party, clear away any glasses with cigarette butt “tea” your guests may have left behind. And never let your dogs get hold of stop-smoking aids, like gum or patches.

Listen, we know you don’t need a lecture. But here’s some advice on how to minimize the impact of your habit:

Don’t leave your butts where a dog can get them. Same goes for your nicotine patches, nicotine gum or your discarded chewed gum or chewing tobacco.

After you smoke, before you pet your critters, wash the particulates off your hands.

This might sound extreme, but consider changing your clothes when you come in, or smoke in a smock or coveralls of some kind—those particulates will be clinging to you and you’ll transfer them to your animals.

Dogs Are Disappearing
Scroll to top