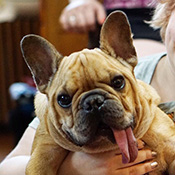 Sadly, Rubble is no longer adoptable. His seizures have worsened and he’ll be remaining in the care of his foster family.

Those wrinkles… Those fat little feet… That side tongue… We couldn’t have assembled a more scrumptious Frenchie if we had tried! This delectable nugget was surrendered back to FBRN by his previous adopters back in 2017 when changing circumstances meant they were no longer able to provide the stability and routine he needed.

Rubble is epileptic and currently taking three types of medication to keep his seizures in check. He must get his medication consistently at the right times every day. And while he has had several seizures while in our care, his neurologist believes his current medications are the right fit as his seizures are less frequent with this new regimen. When Rubble has a seizure, he may lose control of his bladder and/or bowels.

You may have noticed Rubble’s floppy tongue. Before landing back in FBRN care, it’s possible that Rubble’s dental hygiene may have been somewhat lacking resulting in the extraction of a number of teeth, which is believed to be the reason for his protruding tongue.  He eats and drinks fine, although he is not much of a kisser!

Rubble is quite the chowhound, and always has his nose to the floor, snarfing down anything he can get his paws on.  However, he is allergic to a number of foods, so care must be taken that he does not consume anything that will cause an allergy flare-up. Rubble must be kept on a strict Raw Protein diet and specific supplements that we’ve found work for him, and also CBD oil.

According to his foster mom, “Rubble is a big, goofy, wrinkly derp. He sort of marches to the beat of his own drum but he is lovable and mushy and just can’t get or give enough love.

If you have a few extra clams lying around that you could donate towards Rubbles’ vet bills and his Loyal Order of Water Buffaloes membership dues, please click on the link and become a sponsor! Thank you!

Such a cutie! Hoping they find the cause of his seizures.

All our love buddy! Get better!

Prayers and a little something for Rubble from

From Buckminster in honor of National Flappy Jowl day.

Rubble-I hope you are doing well and enjoying your golden years happy and spoiled. Take care and best wishes to you and your family.

Donation to FBRN – For Rubble

Donation to FBRN – For Rubble

Alicia Powell
Some Other Sponsor Name
Scroll to top