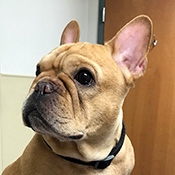 Update: Silas has not had a great year. Since Christmas he has been in and out of the hospital numerous times due to stool impaction. His vet has continued to increase his stool softeners which help, but unfortunately due to his paralysis, his little body just isn’t moving stool like a normal dog. Silas has good days and bad days; and for now, the good outweigh the bad. Silas is loved by his foster family and will spend his remaining time with them.

Sweet Silas was surrendered to FBRN after he lost movement in his hind legs, and his owners were unable to afford diagnosis and treatment. We had hoped that a combination of surgery and physical therapy might get Silas up and walking again, but a veterinary neurologist concluded that Silas’s injury (believed to be a ruptured disc) could not be repaired, and his hind leg paralysis is permanent. But Silas, in typical canine fashion, hasn’t let that slow him down or dampen his joie de vivre.

Silas’s foster mom describes him as a happy camper, who is equally content playing with the resident boxer or tossing his toys in the air for a one-dog game of fetch. When strapped into his wheels, he’s particularly fond of chasing tennis balls and sticks, and he makes certain that no plant, bush, or tree in the yard goes un-sniffed. At 8 years old, he definitely has the energy of a much younger dog! When playtime is done, Silas enjoys settling in with a nice antler or bone, preferably with his person at his side. And cuddles are not optional with this boy—they are 100% mandatory (along with snuggles, snoogles, huggies, and the like).

Please consider making a donation to Silas’ ongoing care and leaving a note of encouragement for him. Just click on the button above to leave him a note. We’re sure he’ll send lots of sweet snoogles your way!

Donation to FBRN – For Silas
Sally Holden, Heather Townsend
For Silas. In loving memory of Baxter.
Mendy Vang
This is for Silas with lots of love. Thank you.
Shannon Helton
Scroll to top